We have some good friends that invited us to purchase season tickets along with them to a local community theaters performances this year.  They were fairly inexpensive (only $10 each), and we thought it would be a fun night out.  We got tickets for 6 shows and they are every other month so we have something to look forward to!

The Clarkston Village Players began preforming live theater in 1961 and their first show was at the local high school. In 1962 (the year I was born) they purchased the "Depot" where they have been entertaining audiences with dramas, music, and comedy shows ever since. The theater was made out of the old Clarkston train station and is very small and very quaint  (it can't have more than 75 to 80 seats) and was built around the turn of the century.  The players are now in their 48th season and still going strong. 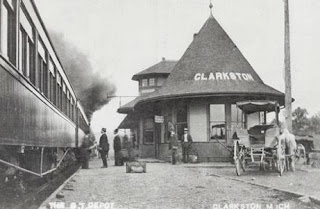 The play we saw, was a saucy comedy called Looking. It was a 4 person ensemble about some middle age people looking for love for the second time around. We had a few laughs, enjoyed the performance, and had a fun evening.

Before the play we enjoyed dinner out with our friends at a bar and grill called "Buck Shots" which is close to the theater.  I had never been there and was pretty surprised to find a buck pole with 3 dead deer hanging from it right in front of the restaurant (but we are in Michigan after all... and it was the second day of hunting season which is a pretty big deal in these parts.)  The place was packed and the food was good. Like it's name implies, it had stuffed game heads decorating the walls and a rustic atmosphere with cool log tables.  My husband and our friend Bill both tried the venison burger and said it was really good (I guess we know the meat is fresh, lol.)  We also got to celebrate my friend Wanda's birthday (a little early). It was a fun comfortable atmosphere, with flat screen tv's, pool tables, and games at the bar.  We enjoyed our time there and would recommend it if you are ever in that neck of the woods. 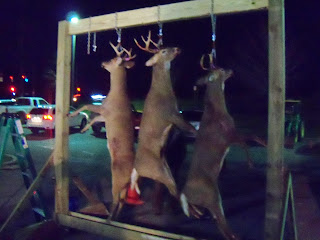 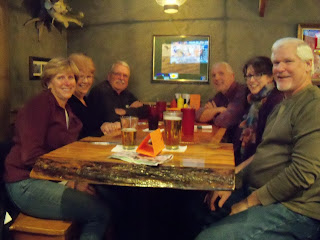 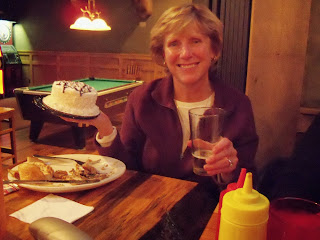 To sum it up, we really blessed to have friends to enjoy nights out like this with.  You don't need to spend a lot of money to have a fun evening out... it wasn't Broadway (or even off Broadway.)  But it was a good time with great conversation, a lot of laughs, and some really good friends!

It's always fun to try something new!  I encourage you to check out your local community theater groups and see what is happening in your area.  Invite some friends and make it a night out.  It is a fun inexpensive activity, and you are supporting the local arts!

Posted by thebluespottedowl.com at 6:00 AM

Email ThisBlogThis!Share to TwitterShare to FacebookShare to Pinterest
Labels: Fun things to do