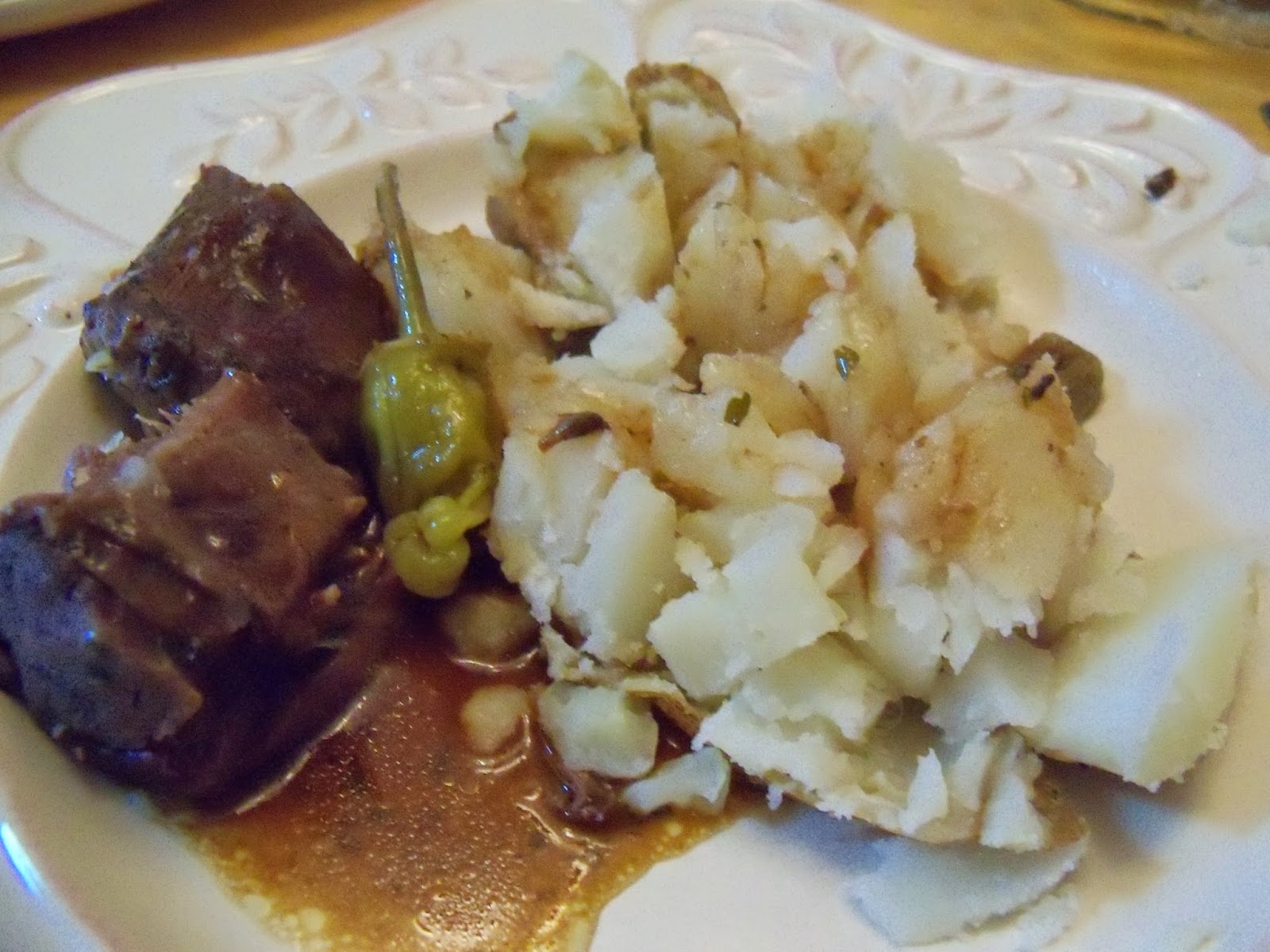 I am not sure why this is called a Mississippi Roast and frankly Scarlet, I don't give a hoot, because this roast is absolutely delish, and super easy!

My Dad will be 86 in May and lately he has had a few issues with falling.  He has been pretty weak, and his blood pressure has been really low at times so I have had to keep a little closer watch on him and help him do more things.  It has been hard, because he doesn't want to be a burden on anyone, and wants to remain independent as long as possible... I get that, but I also don't want him to injure himself badly because he wouldn't let us do something for him.  Little by little he has been letting me do more, and more, today was one of those days.

I had a super busy morning helping my Dad run some errands, and my plan was to throw something quick and easy in the cock pot. This is a recipe that I have seen all over the internet and thought this would be the perfect opportunity to give it a try.  I had purchased all the ingredients yesterday when I did my shopping and was all set to throw it in my crock pot and let it do the magic on low for 8 hours or so.  Hahahaha, perfect plan if I hadn't started running late and was in my car driving to my Dad's before I even realized I forgot to do it! Well fortunately all was not lost, and I was home by 12:30 and was able to get my act together and get everything in the crock pot by 1 pm, so instead of cooking it on low for 8 hours, I just decided to cook it on high for 4. And I am glad to announce it turned out perfect!  The meat was tender and boy did it smell good all afternoon cooking!  I like to take my Dad TV dinners so he can pull them out and enjoy them when he chooses, and I think he is really going to like this one!

Directions:  Spray the inside of your crock pot with non-stick cooking spray. Pour 1/4 cup of water into the pot and place your roast on top of the water.  Sprinkle the roast with the dry ranch mix, and then the dry au jus mix, then place the 6 Tbs. of butter on top of the roast, along with the pepperocini's on top and around the roast.  Cook for 8 hours on low... or if you are forgetful like me, 4 hours on high!  Shred and serve with gravy.

Cooks Notes - We served ours with some nice big baking potatoes (see how we made them below) with the gravy on the side to drizzle over the potatoes and meat!  These would also make great roast beef sandwiches on some big crusty deli buns with the gravy for dipping! Next time I think I will use less butter... don't get me wrong, butter makes everything better, but I think it would be just as tasty with 1/2 the butter! 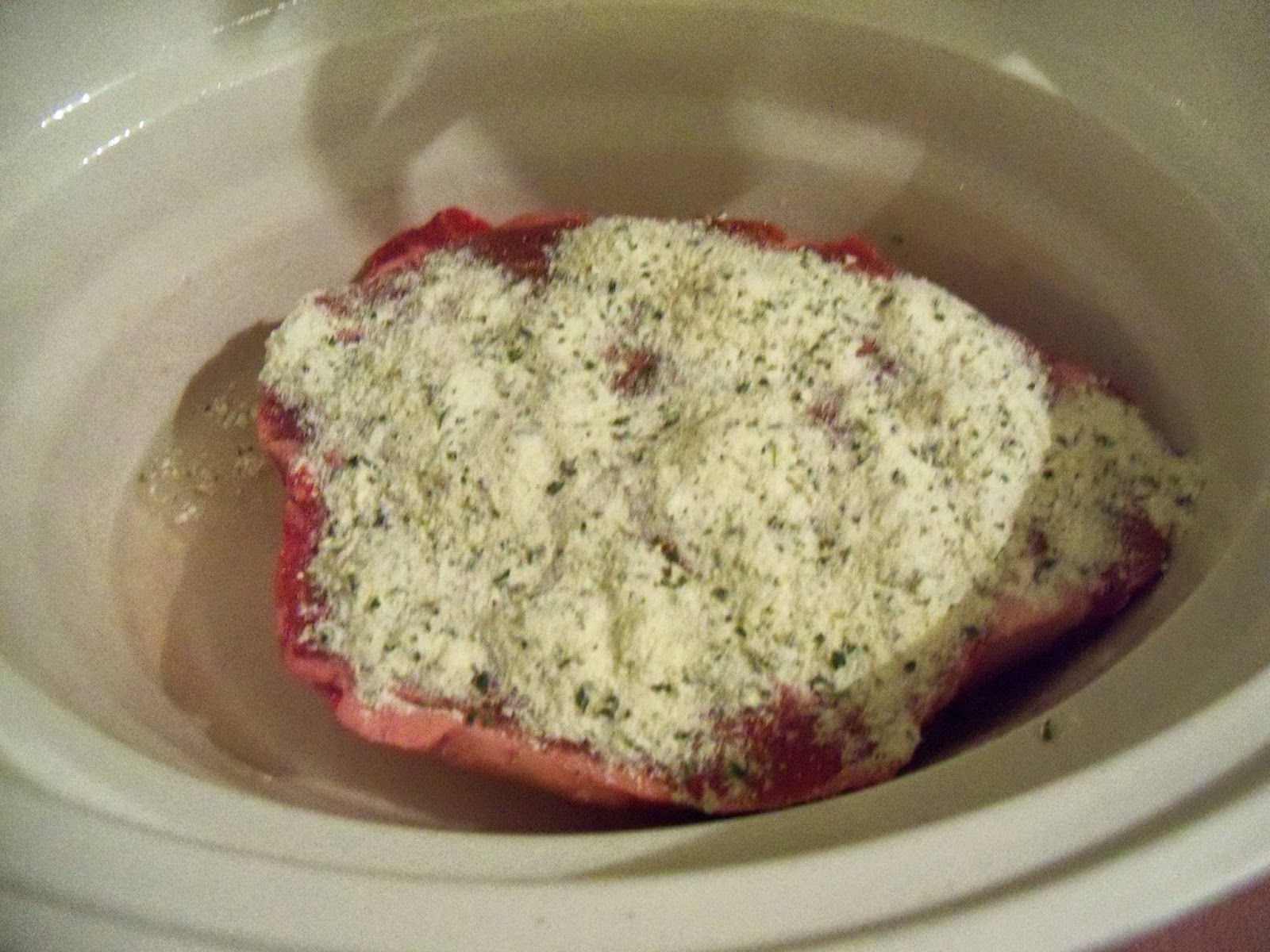 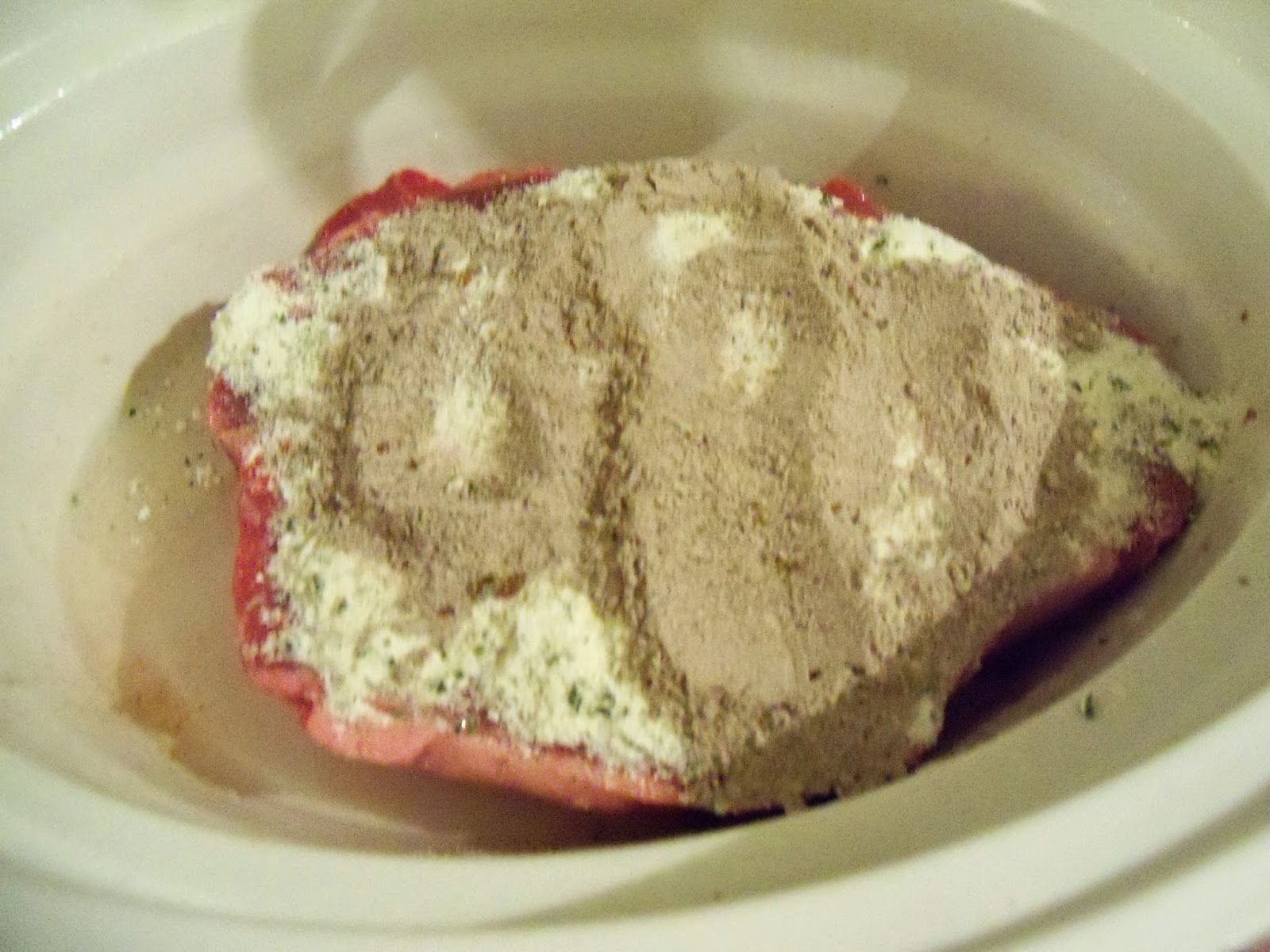 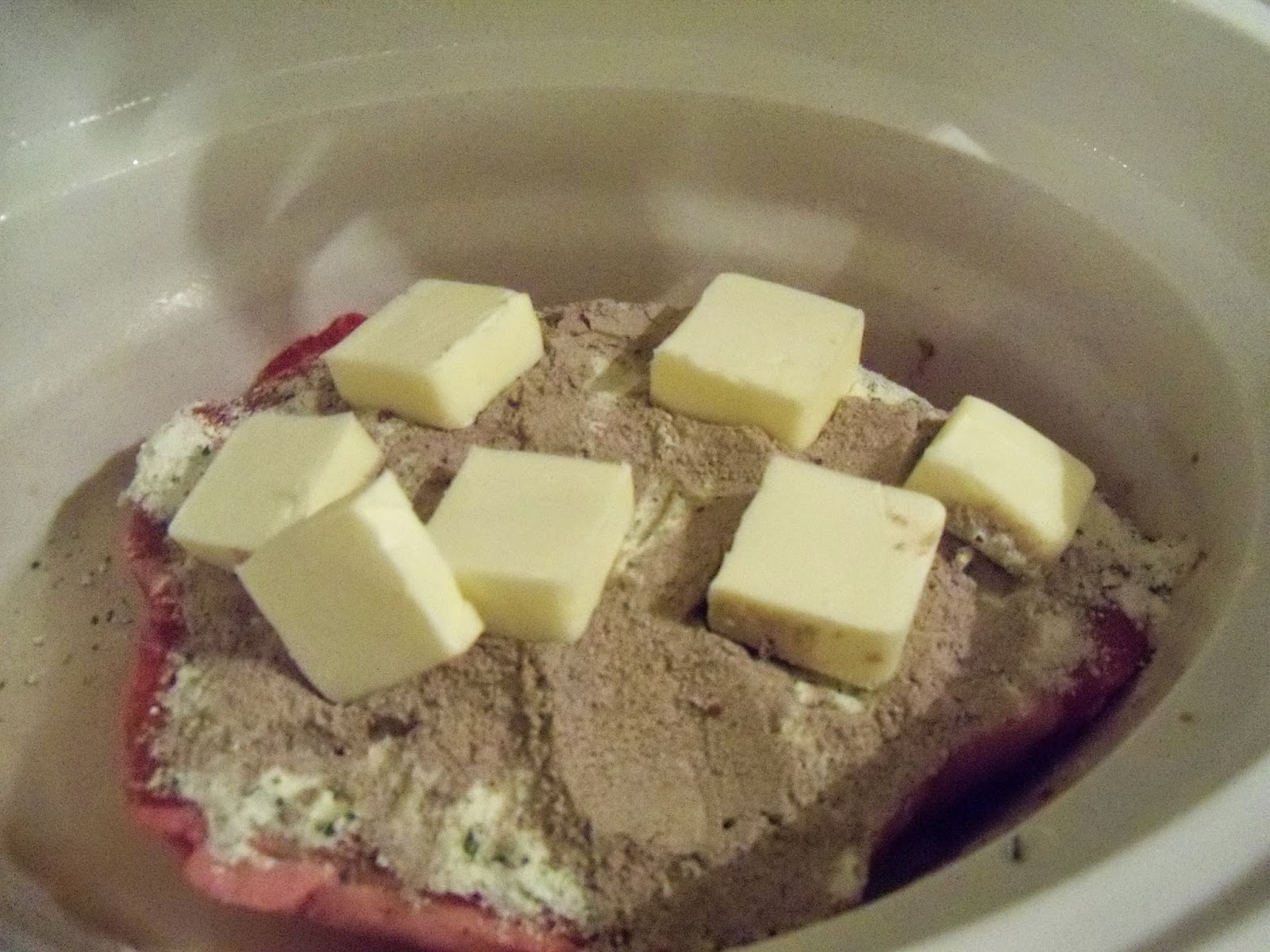 6 Tbs. butter (next time I will cut this in half!) 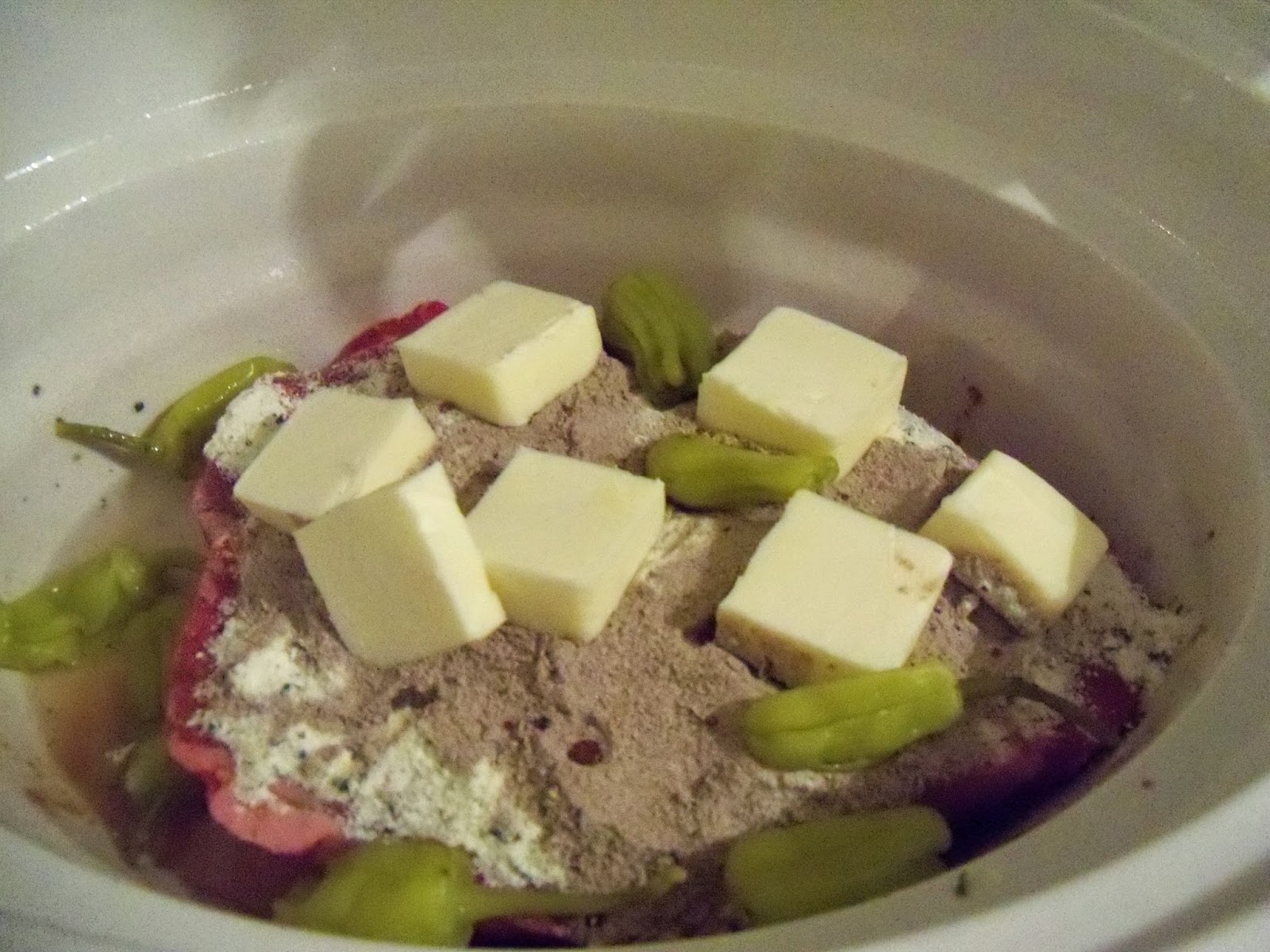 Place pepperocini's around and on top of roast 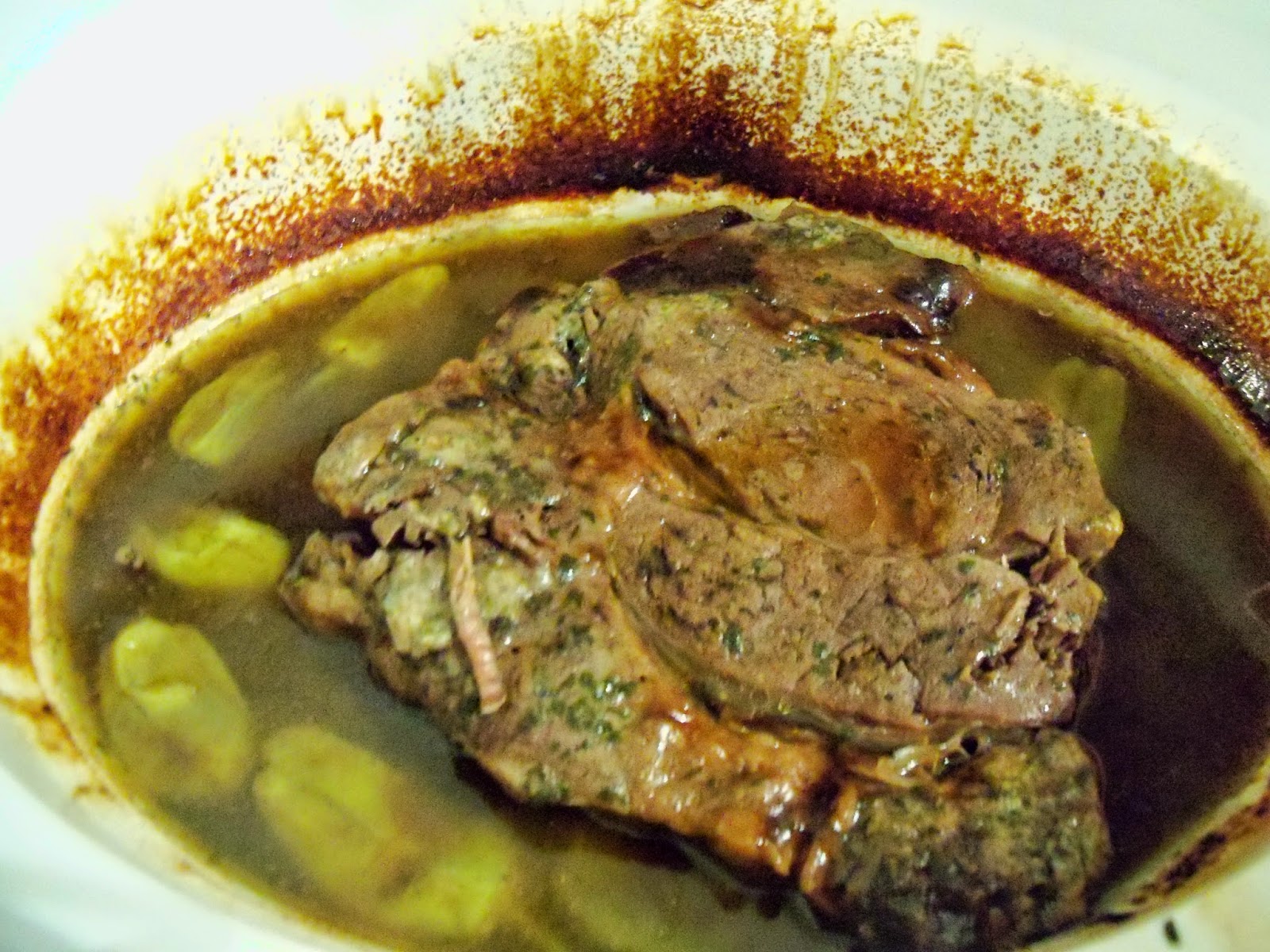 Cook for 8 hours on high, or 4 hours on low until meat is tender 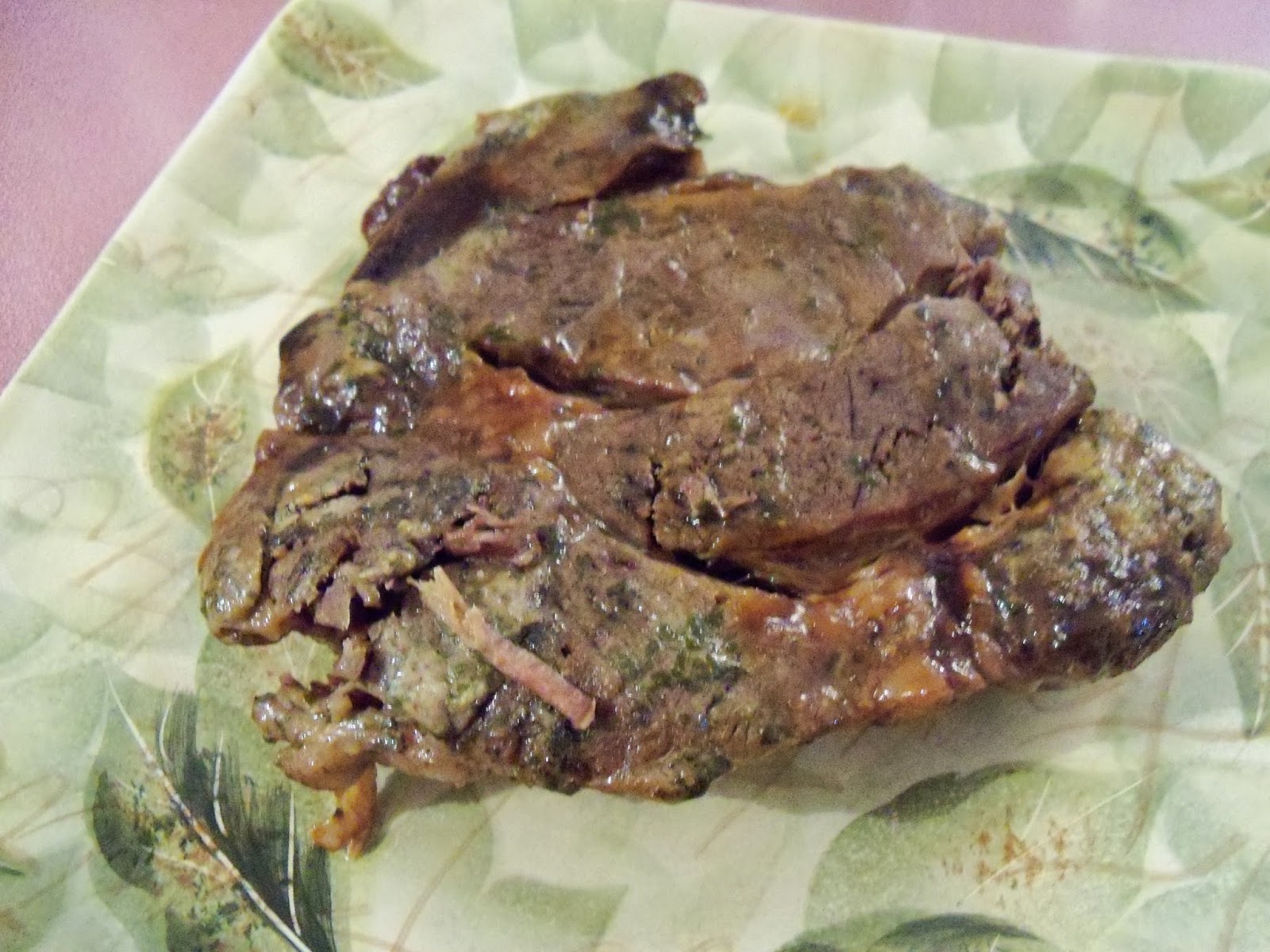 Take roast out of crock pot and let rest, shred if desired 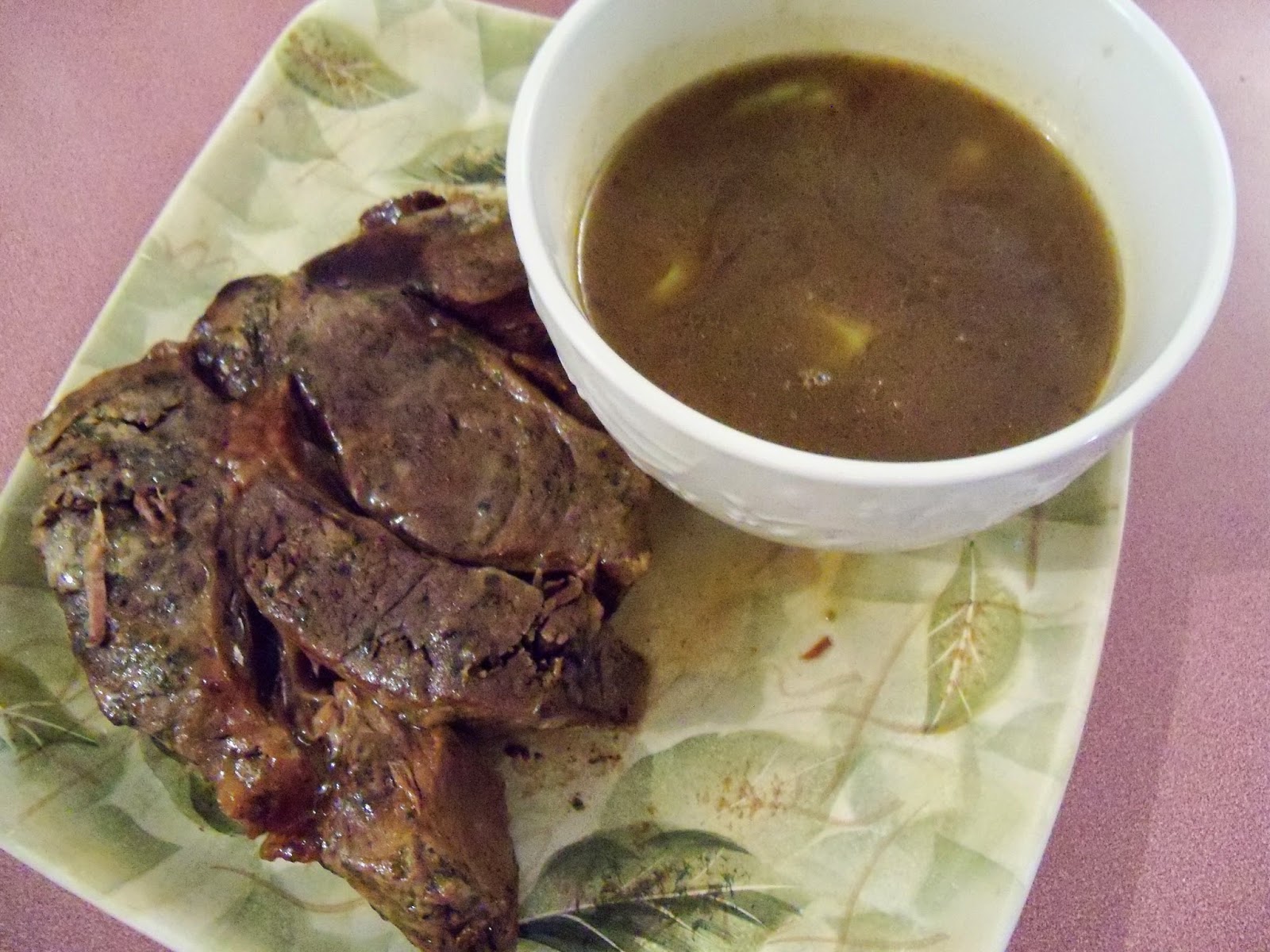 Serve with gravy on the side

I served this up with salt encrusted baked potatoes which is one of my husbands favorites, but it would be delish with mashed potatoes, noodles, or even rice!  Olive oil and coarse salt makes these ordinary baked potatoes just like ones you get at your favorite restaurant or steak house!  Here is how we make them at our house...

Directions:  Wash and dry potatoes.  Pierce each potato a few times to make sure it doesn't explode in your oven :)! Drizzle each potato with a little olive oil, then use your hands to rub it all over the skin of the potato... this makes your hands nice and soft too!  Once they are covered with oil sprinkle each spud with coarse salt and rub it so it coats the entire potato.  I like to do this right in the dish I am going to bake them in... it keeps everything nice and neat!  Place dish in 350 degree oven for about an hour (if potatoes are really large it might take a little longer!)  until they are fork tender. 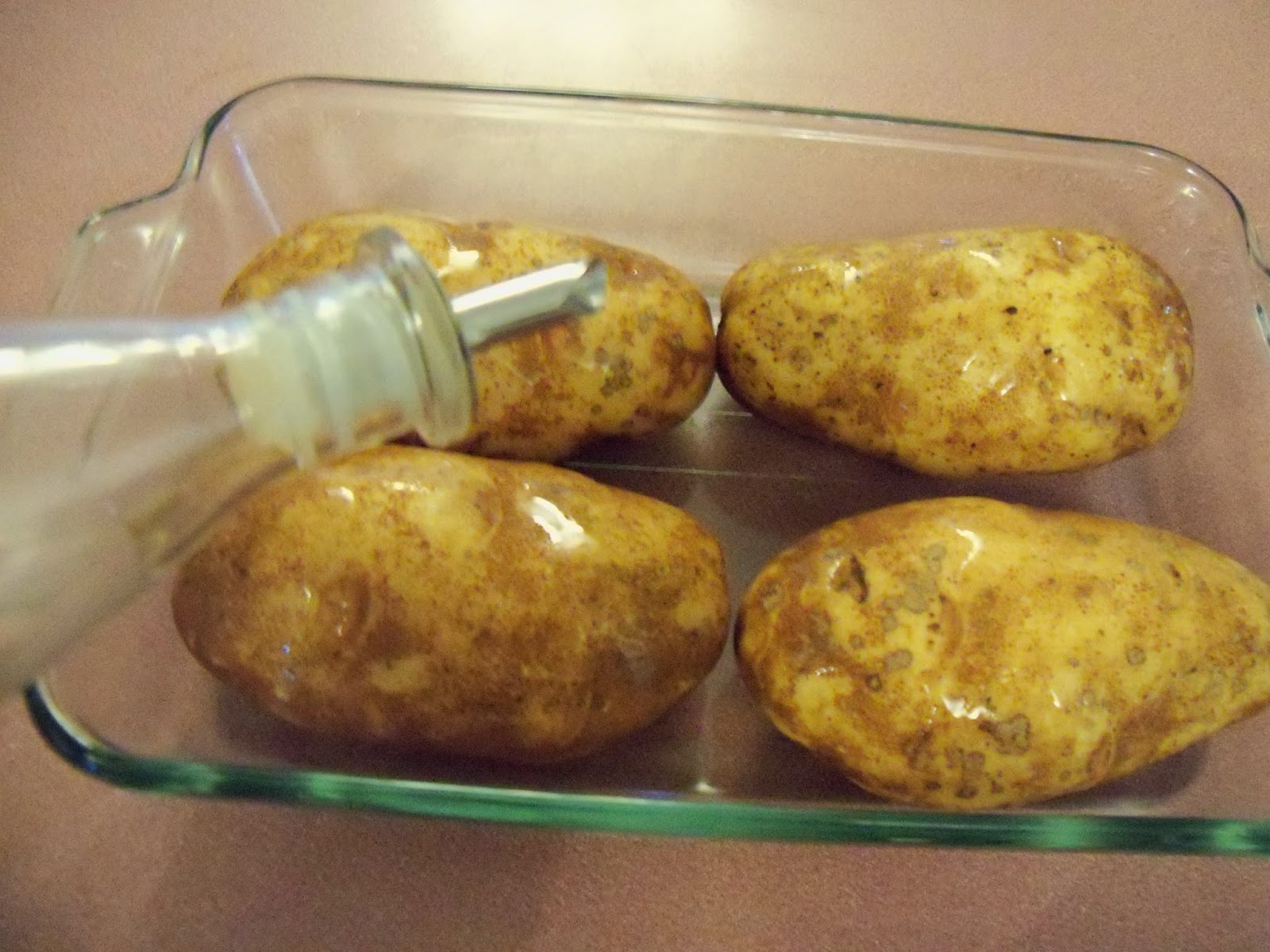 Drizzle with olive oil, and rub all around! 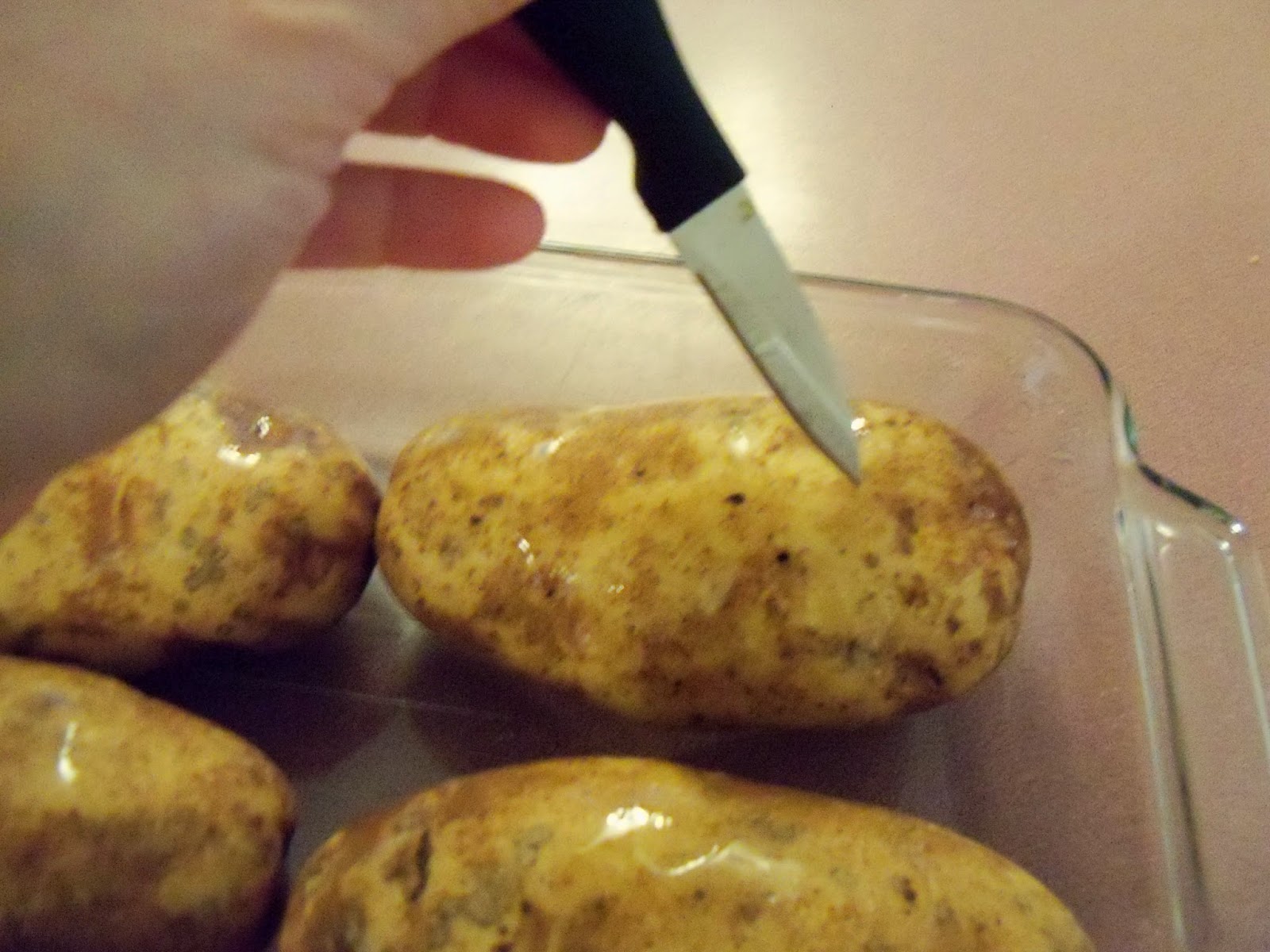 Pierce each potato with knife a few times 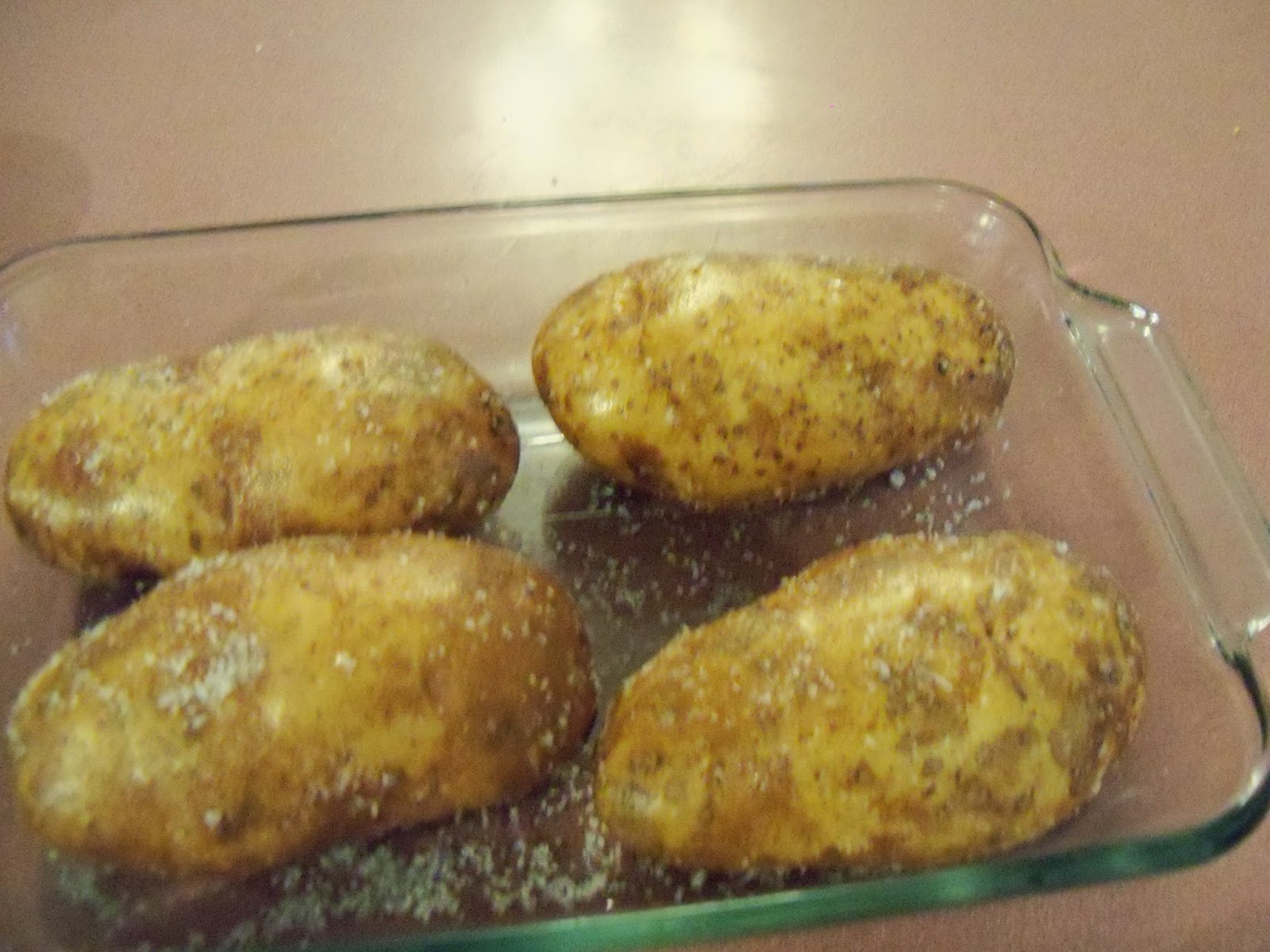 Sprinkle with coarse salt and rub in to cover entire potato 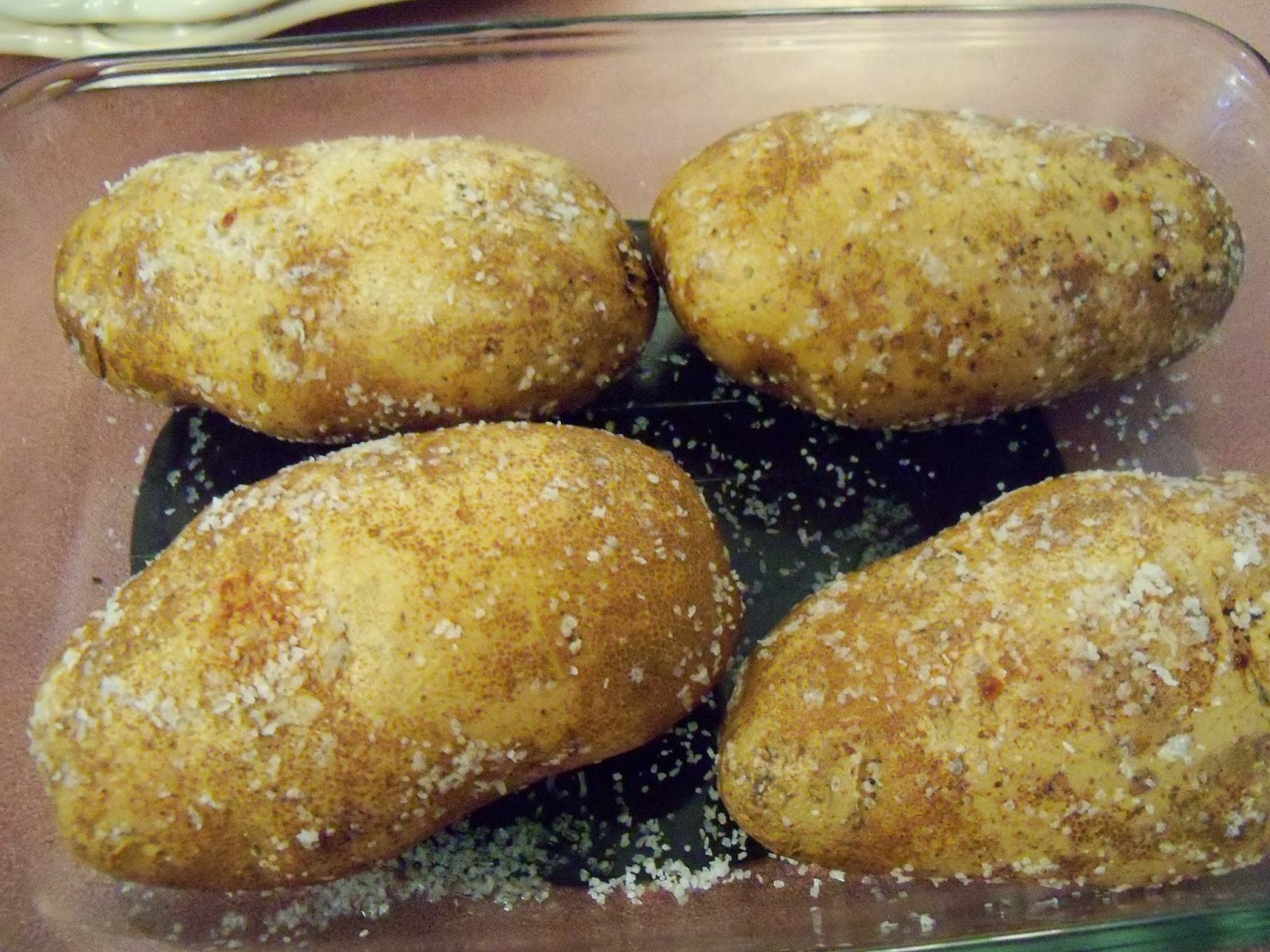 Bake in 350 degree oven for an hour or so until fork tender
and skin is nice and crusty!  If they are really big baking potatoes,
allow for a little longer cooking time! 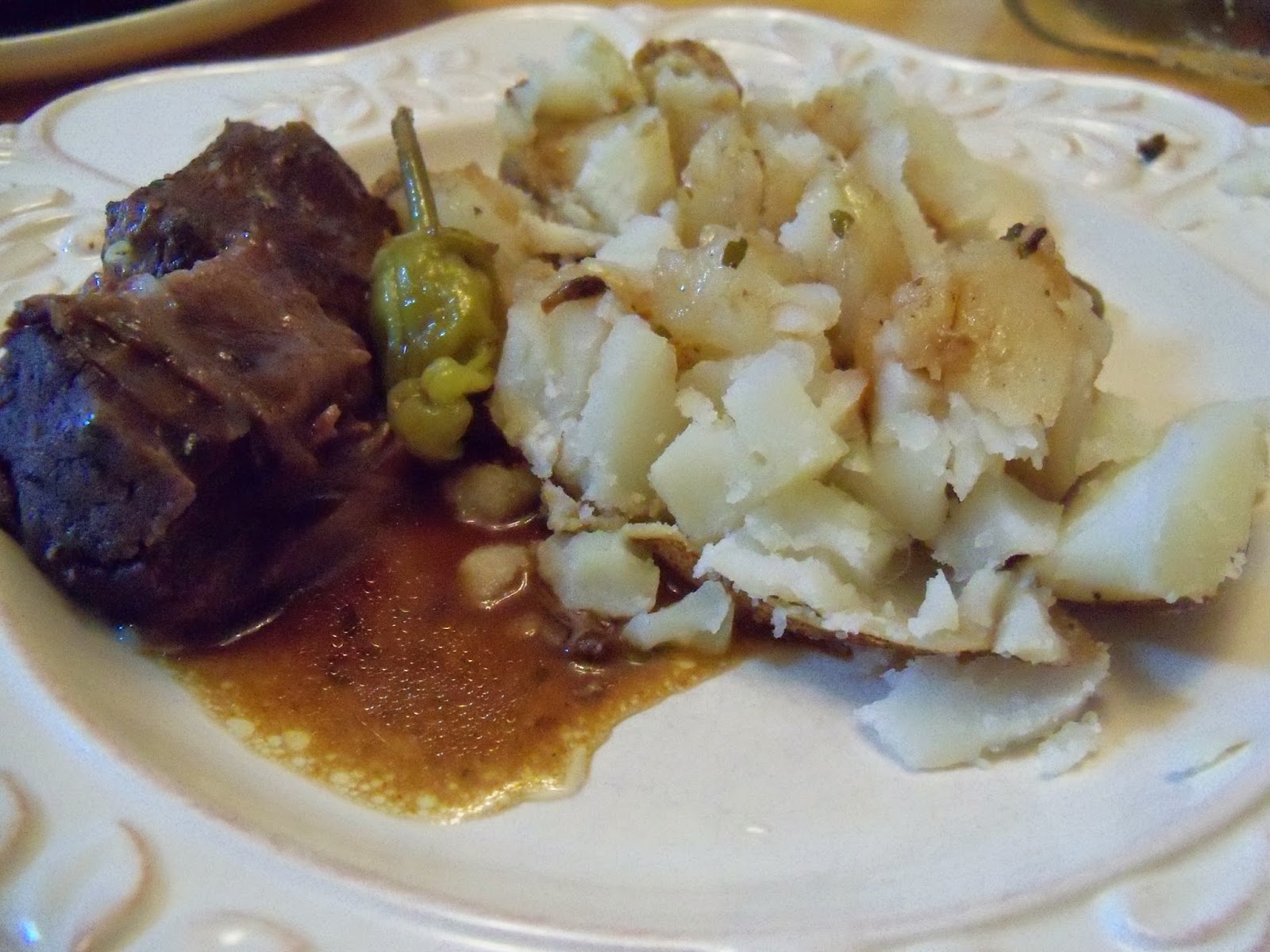 Makes a perfect side for this Mississippi Roast!

Posted by thebluespottedowl.com at 6:01 AM